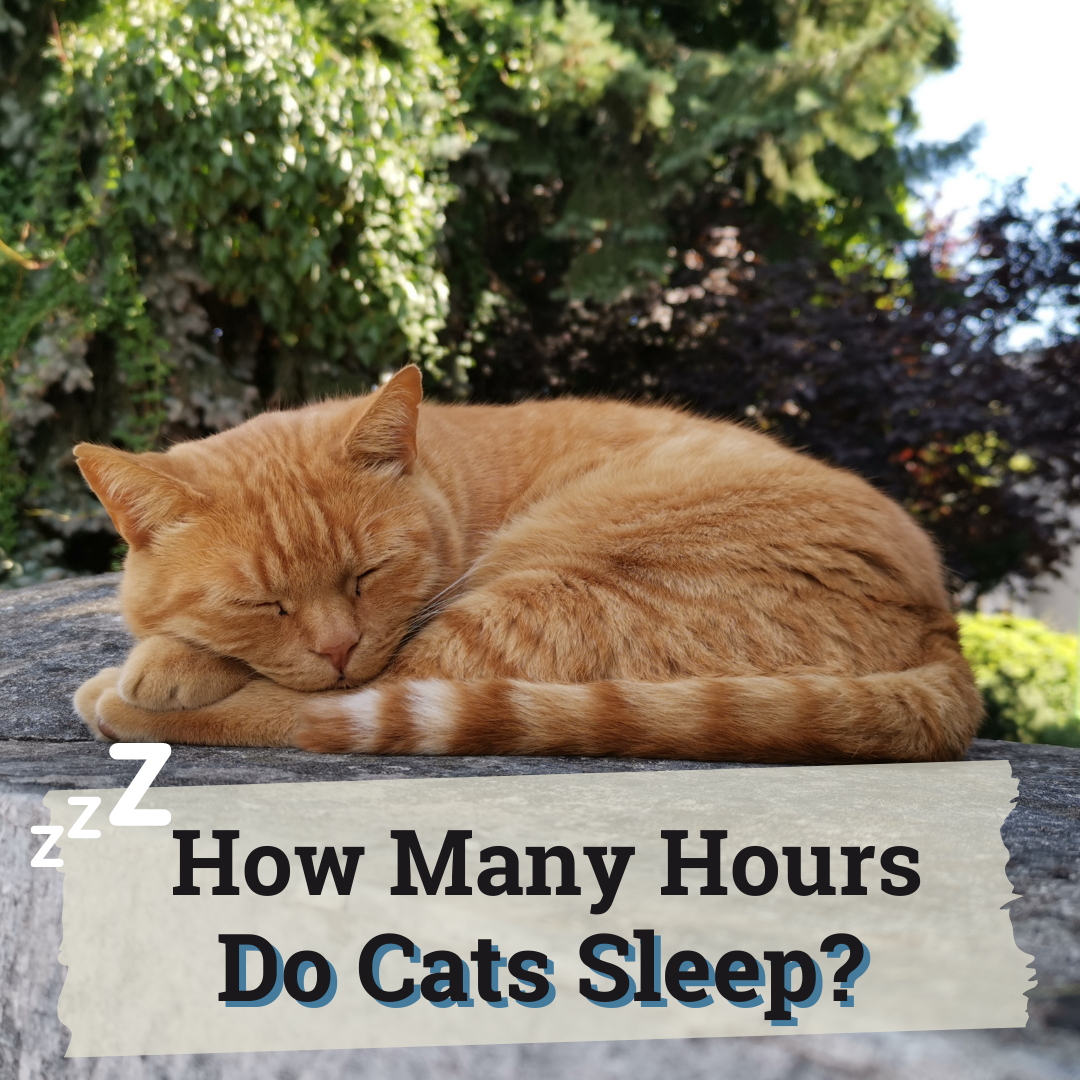 It’s clear cats love to sleep. They seem happiest when they are curled up, snoozing in a bed or a sunny spot on the floor.

That got me wondering: how many hours do cats sleep a day? After speaking with several vets specializing in cat behavior, I discovered cats sleep an average of fifteen hours a day, with some cats spending up to twenty hours dozing.

The amount of sleep they need is determined by several factors, including age, health and personal preferences. With this knowledge in mind, I began to wonder what cat sleep is all about.

I’ve observed my own cats preferring to sleep more in the daytime than at night. I’ve also seen them twitch in their sleep and spend more time catching Z’s as they reach their senior years. I became determined to find out why.

My cats love to wake me up in the middle of the night. And I’m not alone. Many cat owners report that their cats seem to be nocturnal, having an abundance of energy after the sun sets.

But according to veterinarian Dr. Michelle Meyer, domesticated cats are considered crepuscular. This means their peak activity hours are at dawn and dusk. So rather than getting one long stretch of sleep like humans, cats have perfected the art of napping throughout the day and night.

This trait has many benefits for our feline friends, including helping them avoid predators while still allowing them to see food. It is also a mirror image of their prey’s activity cycles. Think about it–the animals cats are most interested in, like birds, rabbits and mice, are most active at dawn and dusk.

And while our house cats have little to worry about in terms of predators and hunting, they still retain their wild ancestor’s tendency to stay awake during the early morning and evening.

So instead of spending their waking hours looking out for danger and seeking out prey, they spend it jumping on furniture and humans, playing with toys, meowing, and wandering around the house.

We tend to be most aware of our cats’ wakefulness at night because it interferes with our sleep. That’s why we mistakenly assume they are nocturnal.

How can I keep my cat from waking me up at night?

Okay, so cats aren’t nocturnal. But that doesn’t mean they don’t keep us up all night! Often, a cat will be more active at night if they aren’t getting enough energy out during the day.

It’s possible they get bored during the day because you’re busy working, so they spend that time sleeping more. When you’re in bed ready to sleep, it might be one of the only times your cat has to capture your attention.

Cats crave connection with their owners. They also need adequate play time. One way to ensure they are sleeping more at night (and leaving you alone) is to dedicate an hour to them before their last meal of the day.

This can include playing with their favorite mouse toy or feather, or taking them outside on a leash to explore the yard.

Once they’re content, give them dinner, as a full belly makes them sleepy. They should start their bedtime routine shortly after, ensuring that they leave you undisturbed at night.

Another method is to do several, short play sessions throughout the day.

If all else fails, closing your door at night may be the only way to guarantee they leave you alone. While they may hate this at first, having a variety of games they can play on their own in a different room might encourage them to enjoy the solitude.

While watching my cats sleep, I often see their feet twitch as if they’re running, their ears flicker, and their eyes move back and forth.

That’s because cats experience rapid eye movement (REM) sleep just like us, which is when dreams happen. When a cat (or any animal) is in REM sleep, their brains are more active, their heart rate and breathing  increases, and their eyes move fast.

Cats do dream. What they dream about isn’t known, but we can make a good guess.

When sleep researcher Michel Jouvet studied REM sleep in cats in the 1960s, he observed that their actions were aggressive. They arched their backs, hissed, and acted as if they were hunting for prey.

One veterinarian who specializes in neurology even said cats move their heads during sleep, in a pattern similar to a wakeful cat when they are watching prey. Because cats are predators, they are probably spending much of their dream time chasing or observing food.

For humans, dreams are about what we do in our daily lives. The same can be assumed for cat dreams. Cats likely dream about exploring their environments, interacting with their owners or other animals they have connections to, or playing with their favorite toys.

Dr. Deirdre Barrett, a teacher and clinical evolutionary psychologist at Harvard Medical School, told People that animal dreams more than likely follow the same pattern as human dreams. “Humans dream about the same things they’re interested in by day,” she explains. “There’s no reason to think animals are any different.”

Do cats sleep more as they age?

When my cats were young, their sleeping patterns were vastly different than when they became older. It turns out, cat sleeping needs vary according to their age.

According to an Animal Emergency Center in Memphis, kittens sleep most of the day with short periods of high energy wakefulness.

Adolescent cats sleep erratically, and have longer periods of play time than their kitten counterparts.

Those in adulthood are set in their ways, with a sleep schedule that averages out to about 15 hours each day. And senior cats spend the most time sleeping out of all age groups, sometimes up to 20 hours in a 24 hour period.

Because older cats can have health and mobility issues, they tend to need more rest.

When cats experience pain or illness, they see this as a vulnerability that makes them more susceptible to predators. To counteract this, they may hide their issues by sleeping, so as not to draw attention to themselves.

Senior cats can also experience cognitive issues just like humans. This can cause them to sleep more, or for their sleeping patterns to become flipped.

Being a cat is exhausting. They are constantly aware of their surroundings, picking up on scents and visual cues that aid their survival. Older cats just don’t bounce back as fast as younger cats. Sleeping helps them recover.

Consult a veterinarian if you’re concerned about your cats sleep

Spending more than a third of the day sleeping, catching Z’s is a big part of your cat’s life. It can indicate a variety of ailments. A cat who is sleeping more or less than usual, or whose patterns have changed drastically, may need to be seen by a vet.

To find out more about your cat and how to give them the best life possible, check out our article on the average lifespan of cats [insert link].

Ashley Davis
Ashley is the co-founder of CatProductGuide.com. She is a professional writer, whose work has been seen in many top publications and websites, like Digital Trends, Opposing Views, Men's Health, and more. She is passionate about all animals, and loves her cats Felix and Lola. Ashley enjoys finding the best products and foods to ensure they're living their best lives possible!

Reach out to us for a consultation.

Keep in mind that we may receive commissions when you click our links and make purchases. However, this does not impact our reviews or comparisons. We try our best to keep things fair and balanced, in order to help you make the best decision for you.

As an Amazon Associate, I earn from qualifying purchases.

As a Chewy affiliate, I earn commissions for qualifying purchases.