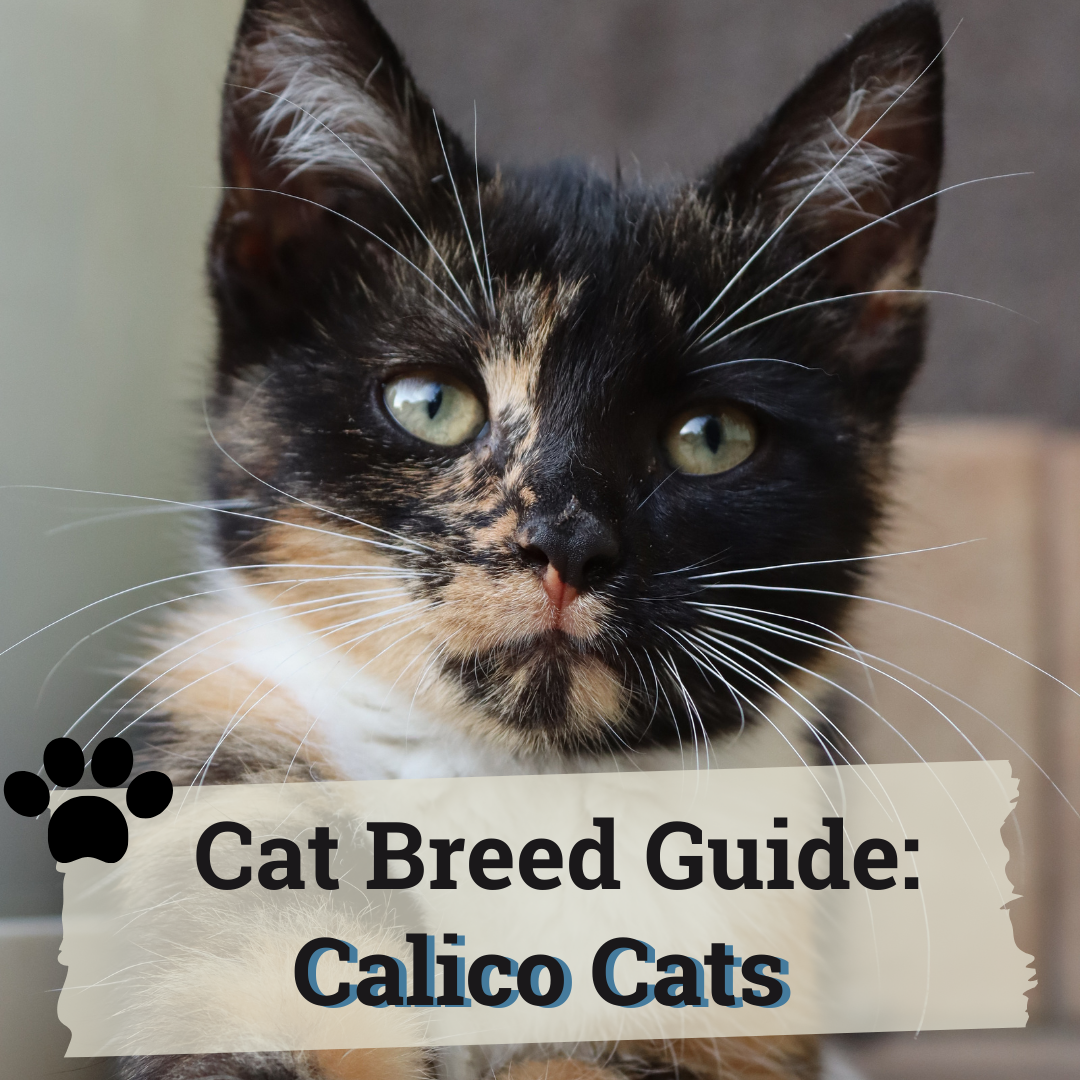 Cats come in many types of colors, but the calico cat is known for its multicolored coat! They are 25-75% white, with large orange and black patches. Sometimes, their patches are a lighter cream and gray. These ones are known as dilute calico cats.

It may be surprising to find out that calicos are not a breed. In fact, the term simply refers to the color of a cat’s coat. All types of cat breeds can be calico, including Maine Coons, Siamese, British Shorthair, and more!

This pattern is often mistaken for tortoiseshell, which is actually more of a blended coat consisting of black and orange, or gray and cream, and very little white markings (if any).

There are times when a kitten is born with a calico and tabby pattern. This coat is referred to as caliby. They often have the distinctive ‘M’ marking on their forehead, in addition to the black, orange and white patches.

You may have noticed that you’ve never encountered a male calico cat. Well, there’s a reason why!

Calico cats are almost always female [1]. This is due to the way their genetics work. The coloring for a calico cat is related to the X chromosome, and cats need two X chromosomes for that calico gene to be expressed. Two X chromosomes means the cat is female, while an X and a Y chromosome mean the cat is male.

But there are extremely rare instances when a male cat will have an extra X chromosome in addition to the Y. When this happens, it’s possible they can be born as a male calico cat. [2]

Sadly, if they have the XXY makeup, male calico cats can have a disease called Klinefelter’s Syndrome. This also causes them to be sterile.

But this isn’t the only way a male calico cat can exist. Kari Ekenstedt, an assistant professor of anatomy and genetics in Purdue University’s College of Veterinary Medicine, says male cats can become calico due to a mutation of the X chromosomes. [3]

An example of this is when a male cat’s cells carry a gene for black fur color, and one chromosome mutates to a new color. This could result in the cat being multiple colors.

Why is my calico cat feisty?

Calico cats are known for their attitude! Scientists believe that the genetics responsible for their colors might also make them feisty.

One veterinarian specialist, Dr. Elizabeth Stelow, conducted a survey of 1200 cat owners. [4] Her results showed that cats having calico or tortoiseshell coats tend to be more aggressive than their solid-coated counterparts. This means they demonstrate more bad behaviors like hissing, biting, growling, or scratching.

That doesn’t mean that all calico cats are mean, though. Their level of attitude can range. Often, a calico cat will just be more independent, wanting to spend more time doing what she wants to do.

Calico cats have unique personalities, just like humans. If you have one that has a bit of a mean streak, you can still spend quality time with them.

The key to doing so successfully is to be sensitive to their needs. This means not making them cuddle or play when they don’t want to. Pay attention to their body language. If they look impatient or disturbed, maybe come back to them later.

Because calico cats are rare, it should come as no surprise that many believe they are lucky. Germans even call calico cats ‘Glückskatze,’ meaning ‘lucky cat.’

Americans sometimes call them ‘money cats,’ as they are thought to bring good fortune to a household.

Even Japan considers the calico pattern lucky. A calico cat talisman named Maneki neko is believed to bring good fortune and wealth. They were brought on board ships in the olden days of Japan, as they were thought to protect against angry ancestor ghosts! [5]

How can I ensure my calico cat lives a long life?

The lifespan of a female calico cat is about 15 years, which is the average for a domesticated cat. This is because calicos aren’t a breed, so they tend to live as long as any other color. The same isn’t true for some male calicos, as stated earlier. Since they can be afflicted with Klinefelter’s syndrome. Boy calico cats with the syndrome can exhibit a variety of symptoms, including:

Because of this condition, male cats have a lower life expectancy.

To increase the lifespan of any cat, whether it be a male or female, supply them with an adequate and nutritious diet. It’s also important to take them to the vet regularly for checkups and bloodwork. Keep up on their medications, if they have any.

So, calico cats aren’t a breed, but they sure are cute! They tend to be female, and can live a normal life expectancy. And while they might have a bit of an attitude, you can’t help but love them! They are truly unique, and we should consider ourselves lucky to have one!

Ashley Davis
Ashley is the co-founder of CatProductGuide.com. She is a professional writer, whose work has been seen in many top publications and websites, like Digital Trends, Opposing Views, Men's Health, and more. She is passionate about all animals, and loves her cats Felix and Lola. Ashley enjoys finding the best products and foods to ensure they're living their best lives possible!

Reach out to us for a consultation.

Keep in mind that we may receive commissions when you click our links and make purchases. However, this does not impact our reviews or comparisons. We try our best to keep things fair and balanced, in order to help you make the best decision for you.

As an Amazon Associate, I earn from qualifying purchases.

As a Chewy affiliate, I earn commissions for qualifying purchases.